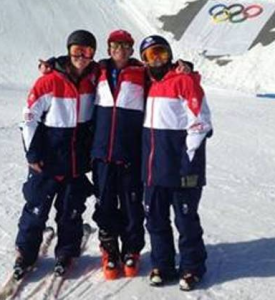 With the Winter Olympics in Sochi starting in less than a week there is real expectation that Team GB can and will do the nation proud!

And for the first time, with the introduction of Freestyle skiing and snowboarding into the Winter Olympics, Team GB is ready to take on the challenge from the rest of the world.

Talent such as James "Woodsy" Woods, Katie Summerhayes and Emma Lonsdale in the skiing field, and snowboarding superstar, Jamie Nicholls are proving that coming from a lowland nation which doesn't get much snow, hasn't stopped them from making it to the world stage.

Under the guidance of Pat Sharples, Team GB's freestyle coach, James Woods is currently the world number one ranked athlete in the sport of freestyle skiing. "Woodsy", who hails from Sheffield and learnt to ski on Snowflex® at the Sheffield Ski Village, has swept all before him over the past couple of seasons.

Katie Summerhayes, also from Sheffield, and Emma Lonsdale who learned to ski and honed her skills on Snowflex® at the Kendal Snowsports Club, have both been putting their mark on the international freestyle ski scene too.

Emma said "I think the reason Great Britain is quite strong in the freestyle skiing and snowboarding is because of the facilities we have up here in the north. I grew up on Kendal and while some people scoff about skiing on plastic it is where a lot of skiers originate from and it's an invaluable base. I raced on dry ski slopes for many years and then when Kendal changed to having Snowflex® moguls and jumps that was quite a turning point in my career. If it wasn't for that I probably wouldn't have got into freestyle skiing at all."

Not to be outdone by the skiers, Jamie Nicholls who hails from Bradford, has long been cited as a trail blazer on the UK scene.

Jamie reinforced what Emma Lonsdale said: "I started riding at Halifax Ski and Snowboard Centre when I was 7 years old, on Snowflex®. It's crazy to think how far you can come from a place with no mountains and not much snow. But Snowflex® has helped me to get to where I am today and if it wasn't for Snowflex® I'm not sure where I would be right now."

Terry Di Stasi, Director of Business Development for Briton Engineering Developments added "All of us at Briton Engineering Developments Ltd get a huge thrill when we see talent coming through the many Snowflex® facilities around the world. And when we saw that from the nineteen skiers and snowboarders in the Team GB freestyle team, nine learnt and trained on Snowflex® that makes us particularly proud. And we look forward to more Olympians coming from other Snowflex® centres around the world in the future"

Briton Engineering Developments are the inventors and sole manufacturers of the award winning Snowflex® snowsports surface system and ZoomTrax tubing system. Briton have been involved in over 200 snowsports projects in the UK and internationally.

Any enquiries about the company's products and services please contact info@snowflex.com or